Give your future Broadway stars a taste of what it takes to be on Broadway. During this New York City tour, students can attend a Broadway show and often include an off-Broadway performance as well. Students may also schedule a post-performance meet and greet with the cast and even participate in their own drama workshop.

And of course, they’ll explore the city’s famous museums, financial district, Central Park, Fifth Avenue and may take a ride to the Statue of Liberty. Give your students a chance to explore every niche of New York City with this extensive Big Apple tour. 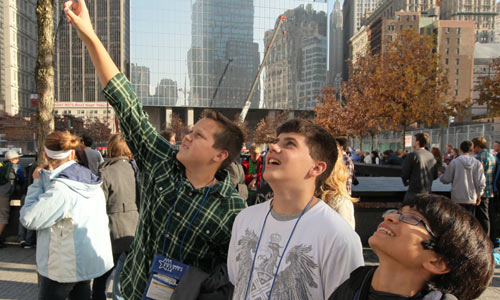 Maybe it's time to visit some of Manhattan's oldest and most enchanting historic districts.

The Empire State Building is a 102-story landmark skyscraper and American cultural icon in New York City at the intersection of Fifth Avenue and West 34th Street. 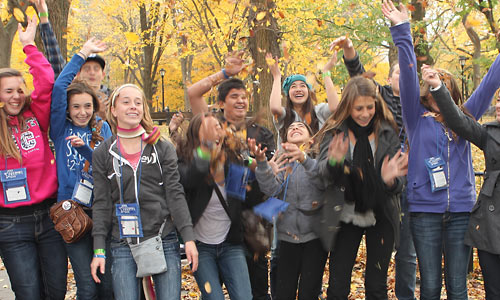 Central Park is a public park at the center of Manhattan in New York City, New York, United States.

Lincoln Center for the Performing Arts is a 16.3-acre (6.6 ha) complex of buildings in the Lincoln Square neighborhood of New York City's Upper West Side.

The Metropolitan Museum of Art (colloquially The Met) is an art museum in New York City. Its permanent collection contains more than two million works, divided among nineteen curatorial departments.

The American Museum of Natural History (abbreviated as AMNH), located on the Upper West Side of Manhattan in New York City, United States, is one of the largest and most celebrated museums in the world.

Walk to a Broadway Show

Broadway theatre, commonly called simply Broadway, refers to theatrical performances presented in one of the 40 professional theatres with 500 or more seats located in the Theatre District centered along Broadway, and in Lincoln Center, in Manhattan in New York City.

Times Square is a major commercial intersection in Midtown Manhattan, New York City, United States, at the junction of Broadway and Seventh Avenue and stretching from West 42nd to West 47th Streets. 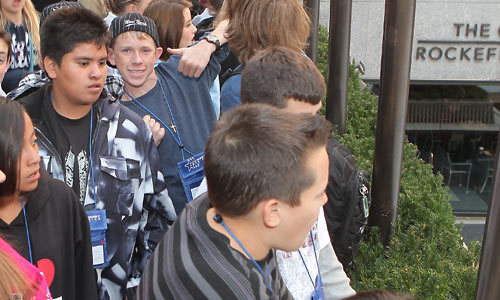 The Basilica of Saint Patrick's Old Cathedral, or Old St. Patrick's, is located at 260-264 Mulberry Street between Prince and Houston Streets in the Nolita neighborhood of Manhattan, New York City, with the primary entrance currently located on Mott Street.

The NBA Store is a series of officially licensed retailers which sell merchandise for the National Basketball Association (NBA).

Abercrombie & Fitch (A&F) (NYSE: ANF) is an American retailer that focuses on casual wear for consumers aged 18 to 22.

Tiffany's flagship store, since 1940, is located at the corner of Fifth Avenue and 57th Street in Manhattan, New York City.

The FAO Schwarz flagship store, located in the General Motors Building at Fifth Avenue and 58th Street in Manhattan, is currently the brand’s only brick-and-mortar store location and a famous destination in the city.

Ferry ride to: The Statue of Liberty

Ellis Island is an island in New York Harbor and was the gateway for millions of immigrants to the United States as the nation's busiest immigrant inspection station from 1892 until 1954.

The current structure, one of the best surviving examples of classical architecture in New York, was built as the country's first Customs House, opening in 1842.

Wall Street refers to the financial district of New York City,[1] named after and centered on the eight-block-long street running from Broadway to South Street on the East River in Lower Manhattan.

St. Paul's Chapel, is an Episcopal chapel located at 209 Broadway, between Fulton and Vesey Streets, in lower Manhattan in New York City.

The 9/11 Memorial is the principal memorial commemorating the September 11 attacks of 2001.  The memorial is located at the World Trade Center site, on the former location of the Twin Towers, which were destroyed during the attacks.

Walk to Theatre District
Walk to Broadway Show or

Broadway theatre, commonly called simply Broadway, refers to theatrical performances presented in one of the 40 professional theatres with 500 or more seats located in the Theatre District centered along Broadway, and in Lincoln Center, in Manhattan in New York City.

Times Square is a major commercial intersection in Midtown Manhattan, New York City, United States, at the junction of Broadway and Seventh Avenue and stretching from West 42nd to West 47th Streets. 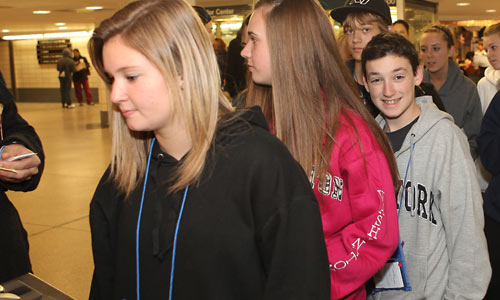 Greenwich Village, often referred to in New York as simply "the Village", is a largely residential neighborhood on the west side of Lower Manhattan in New York City.

SoHo is a neighborhood in Lower Manhattan, New York City, notable for being the location of many artists' lofts and art galleries, and also, more recently, for the wide variety of stores and shops ranging from trendy boutiques to outlets of upscale national and international chain stores.

Dramatic Workshop was the name of a drama and acting school associated with the New School for Social Research in New York City.